Loads Of Food Consumed. Not A Single Pound Gained.

It feels good man…either it’s a fluke or that stuff I was talking about in the last post was legit. 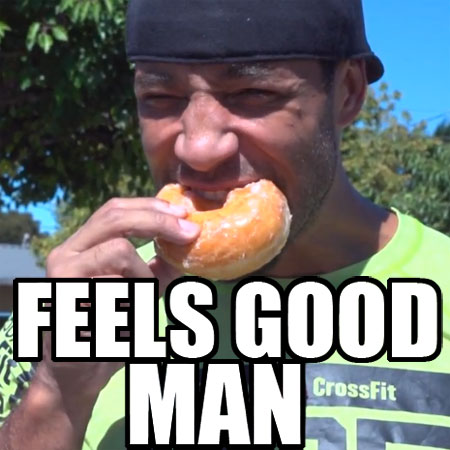 I’ll admit that I didn’t follow the usual protocol on Thanksgiving day, as I previewed the mashed potatoes earlier in the day lol. So that killed my fat burning process earlier than usual. No worries. I just kept to the rest of the plan.

Ohhhhh it was glorious. Aside from the usual Thanksgiving staples of turkey, mashed potatoes, stuffing, and whatnot, we also had some really out there dishes thanks to my Dad. Even though I said in my last post I didn’t feel a need to go crazy with my food intake, I did. Sorry I’m not sorry.

I don’t think I’ve had a food coma like that in such a long time. Towards the end of the night, my mind was getting all cloudy and I couldn’t even drink anymore beer. I was just too stuffed for that. And if I wanted to put anything else in my body, it was more dessert.

It was around 10ish when I was starting to black out. Honestly, I had no more reason to stay up, as our company left already, I was more than satisfied by the amount of food I consumed, and God didn’t want me to watch the rest of that trainwreck of a Jets game. Shit. WTF.

Due To The Severity Of My Food Coma…

…I was worried I wouldn’t be able to fulfill my promise to you guys of using that mondo Thanksgiving dinner as fuel for my noon WOD. So I just kept thinking to myself that “Yes, I’m going to workout” and “Yes, all the food I ate will help me tear shit up at the box the next day.”

Maybe you think that newage self-help stuff is a crockful of shit, but this positive thinking seemed to help.

I got up at a good time for my coffee and meditation sesh. Then I had coffee and BCAA’s before my WOD. I was wired as fuck, you guys. My mind was set on going to the gym and kicking ass, and even if I was actually bloated and feeling shitty from the night before, it just wasn’t registering in my head.

…only because I was still wrecked from the GHD’s in Wednesday’s workout. Other than that, I was feeling pretty solid.

Here’s what we had in store:

Since our class was pretty packed and there weren’t enough rowers, I opted for the 200m run instead of the row (why not work on my running, right?) and subbed down to a 185# deadlift. Despite Rx’ing the rest of the week’s WOD’s, gauging the weight to use for deadlifts is still a bit vague to me.

For the longest time, I’d always have lower back problems after a heavy back squat or a heavy/high rep deadlift sesh. It wasn’t until I started using a standing desk that I started progressing with my deads without the back issues.

Fortunately, for this workout, things were good despite having my hamstrings blasted to fuck. I could probably do 205# next time, so I’ll consider that for any similar workouts.

Once the clock started, my caffeine high and mashed-potato-fueled body went to work. The deads were smooth but not crazy fast, which was ideal for this WOD. My right hand was still healing from a pull up tear during the week, so it surprised me I managed to do all my deads unbroken.

If anything, the run held me back, but I was just going for that consistent pace. And you know what? It paid off.

Finished with 8:54. I’m pretty stoked with that time.

Did any of you also workout the day after Thanksgiving? Post your comments below.

P.S. If any of you are doing any Cyber Monday shopping, it’d be awesome if you use the links below. With your help, I can put together an awesome forum for you guys.

You can also pick up some KippingItReal shirts and hoodies here:

That’s awesome, Barry. Now that AMRAP you did combines two of my least favorite things lol…

1. I sort of did the opposite and drank more beer than I ate…I was pretty upset because I wasn’t able to eat as much as I had planned, and we didn’t really have crap for leftovers…huge disappointment.
2. All I did after Thanksgiving (wasn’t feeling the energy like you, maybe I should give that new age bullcrap a try) was bench and squat.
3. I think you could have done it was #225! What is your 1RM dead?

1. Whatever. It’s Thanksgiving…YOLOOOOOO
2. Did your eating help at all with those lifts?
3. Damn, haven’t tested my max since January. Was 355#. I can’t definitely do more now, but yeah, 225# is iffy for me. Once I get more comfortable with higher rep deads, then yeah, 225# would be likely. Just didn’t want to mess up my back.

2. Well not really, most of my calories were from beer and I’m pretty sensitive to gluten, so I was feeling like a horse’s patoot the next day.
3. Yeah, good call on not effing your back up, but next time maybe take a walk on the wildside. If it doesn’t feel good goin full speed there is no shame in doing the deads a little slower…

And FYI for everyone’s who’s tried posting but a) never had their comment approved or b) never got a response from me…my b.

Believe it or not, this blog gets spammed more than any other site I’ve made haha. I just started using a plugin that helps me filter out those spam comments automatically.

Sounds like a great Holiday. That WOD is right up my alley! I am out of action for the time being. ACL reconstruction. Keep posting.

Hey, Rob! Yeah man, it was a good time. Get well soon! Make the most out of your rest, and I look forward to you kicking ass again in the near future.

went to an American Thanksgiving celebration in canada sat night, def ate a lot of stuff i normally wouldn’t and had to beg off a late night in order to hit the gym sun morning….PR’d two lifts, 155 C&J and 240 # DL, Huge day for me!
so the food didn’t hurt me….I am glad that I didn’t go overboard, it was great!

It’s all about finding that middle ground, ya? Congrats on the 2 PR’s, Tonya! Kip it up.

Love your blogs – entertaining and informative. Keep it up please.