First of all, yeah..once again quite a hiatus. Not for over a month like last time, but pretty bad. For that, I apologize.

I missed writing for you guys, so I felt like tonight would be a good time to get the ball rolling again. And I mean LEGIT – posts every day and constantly shooting the shit with you all over social media. I see bigger things in the future for this site (more on this later). You can also thank Brad for posting on my Facebook page. That was another kick in the ass to get me writing again.

So yes, it’s Thanksgiving tomorrow. One of my favorite holidays because there’s just something about that combination of turkey, gravy, and mashed potatoes. Thanks to having an awesome Dad as our cook, the food’s always good. Also, this seems to be the holiday that most of my friends from elementary/high school tend to be in the area, so that means fun times as well. 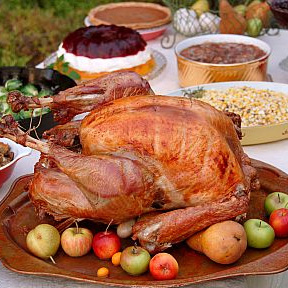 Anyway…the food. Last Thanksgiving was ridiculous cause my cousins from Canada stayed for a few days, so that meant my Dad went all out on cooking every single day. And of course that meant I went all out on eating. The funny thing is, despite feeling bloated as fuck and a bit hungover, I still PR’d my power clean (was 225# at the time).

This year, I want to enjoy myself, yet at the same time, there’s really no reason to go YOLO on the food and eat until I get sick. Also, it’d be really lame to limit my eating, as it’s such an awesome holiday.

The past few weeks, I’ve been experimenting with some intermittent fasting techniques. Yeah, I’ve already been doing that for a while, but FUCK was my nutrition OFF and TERRIBLE for so long. I’ve been messing around with my own version of Carb-Backloading and the Renegade Diet, and what I’ve learned so far is I haven’t been taking in enough carbs for my energy.

Yeah, I could go full Paleo and rely upon healthy fats to fuel my workouts. That’s helped me in the past. However, when I messed around with this style of fasting and having high GI carbs at night, my workouts at noon the next day were ridiculous. I was Rx’ing WOD’s for the past two weeks. Generally, I’d take things easy with weights, going only a few pounds over the women Rx.

Similar to my friend who just couldn’t handle demanding WOD’s on strict Paleo, I got a better idea of what works for me.

It pretty much involves:

1) Coffee and a small protein shake upon waking up
2) Coffee and some BCAA’s 30 minutes or so before the noon workout
3) Post-workout protein shake 30 minutes after workout
4) Lunch around 30 minutes after…basically a Paleo-friendly meal of protein, veggies, and fat
5) A heavy dinner of protein, some veggies, and high GI carbs like sweet potatoes, white rice…shit even some people can take in crap like pizzas and white bread (the “carb back-load”)
6) A 14-16 hour fast

To sum the reasoning for this, the fast helps you burn fat while your cortisol levels are still high in the morning, then the carb back-load at night replenishes your body for your workout the next day. Once again, I’m not an expert…so I could be totally wrong with all this shit.

You can learn more at http://www.dangerouslyhardcore.com/

I’m simply taking the information online and in their books and tweaking things to my own body. This stuff really isn’t for CrossFitters. It’s more for people who just doing heavy lifting routines. Not merely bi’s and tri’s, but lots of compound lifts. I’m just curious what I can do with the right tweaks.

For example, with CrossFit and my body, I know I can’t slam pizzas like some mofos out there. Not possible. Even though these guys say white Jasmine rice (which thankfully is a normal food staple for my family) is the purest of the “dirty carbs” they recommend for the back-load, I still need to watch my carb intake. The past few weeks, my carb levels have been too high. A little bit of a gut has been developing lol.

I just know with more experimenting, I’ll be able to dial in on carb intake that I can still eat white rice while staying lean AND having enough energy to crush a WOD.

Before on Paleo and Slow-Carb (Tim Ferriss’ 4-Hour Body stuff), I would basically feel a hangover-like feeling after a WOD. Now, I’m still beat after a workout, but I’m not a total wreck. Feels good man.

So how am I gonna crush tomorrow?

Yep, gonna use Thanksgiving dinner to my advantage. I plan on working out on Friday at noon, as ridiculous as they may sound after eating lots of food the night before. With the past few week’s testing, I’ve been able to do well with WOD’s even with a HUGE dinner, so I know I this year’s Thanksgiving will be pretty glorious.

I’ll have something Paleo-like for lunch…then just eat however much my heart desires, although not to the point of sickness as last year haha.

Just wanted to update you guys on what I’ve been up to. Experimenting’s been fun and I understand I’ll make a bunch of mistakes along the way. What’s the worst that could happen? A few weeks of weight gain? That’s fine. I’ll make the necessary tweaks to reach my goal of dropping fat while still having the energy to CrossFit.

And one last thing…

…regarding my bigger vision for this site: forums. Yes, I’m going to start a forum here, cause it’ll be pretty sweet for you readers to just shoot the shit and enjoy the company of other people in our sport.

That means I have to buy some forum software.

I know a bunch of you are already doing some online shopping this week on Amazon and whatnot, so if you want to support the growth of Kipping It Real, I’d really appreciate it if you could use my affiliate links below.

How does it work?

1) Simply click one of the links below to the the stores you’ll shop at.
2) Make the purchases you already would’ve made without these links.
3) I make some commissions off your purchases, which’ll go towards the forum software and other costs for maintaining this site.

If you do use my links, I’ll really appreciate it. If not, shit…I’ll still keep writing for you all.

Have a Happy Thanksgiving, everyone! Stay safe and enjoy this time with your friends and family.

That carb backloading seems pretty interesting, let us know if you continue to do it and maybe I’ll give it a try! If there was a forum I would definitely participate!

Happy thanksgiving to you as well, Brad!

Yeah, CBL is pretty sweet. My trainer friend has done his own variation of it recently, and man, he’s been tearing shit up at his recent CrossFit competitions.

Been getting good feedback on the forum idea so far w00t! Aside from the official forums, I don’t see much action on others. I’m sure you and my other readers here can change that.