Okay, remember when I started carb back-loading? Well, for a few weeks, it was doing well for me…performance-wise.

That’s why it made CrossFit funny to me. While I was doing some intermittent fasting from morning to pre-workout/post-workout, I would slam high glycemic carbs like white jasmine rice in addition to my protein, veggies, and some fat. I was Rx’ing almost everything thrown at me. My times were ridiculous.

And you know what else?

I no longer felt that post-workout “hangover.” Yeah, that’s the best way I could describe it.

For the first week or so, my weight was manageable. I was gradually dropping some weight in the process, but there was just something about carb back-loading that didn’t really work for me. It had to be the kinds of carbs I was using. I learned all this stuff from various sites out there, so I knew that these were the right carbs recommended, with white jasmine rice even considered the “cleanest of the junky carbs” for this process.

Unfortunately, I don’t think my body can handle these carbs properly. After a while, I noticed my weight was harder to control and my gut was starting to get a little bigger and softer. Not cool.

I’m sure it’s possible to get down in body fat with carb back-loading, and while it was hilarious seeing my performance go through the roof with this kind of eating, I think I’m going back to a slow-carb/close to Paleo approach with the back-load.

As I said, I’m not afraid to experiment with things. These past few weeks, I learned that my body was simply not getting enough carbs. Since I was gaining some body fat, I think my next tweak is simply to up my intake of something like sweet potatoes. That should be a good thing to have at dinner.

Eating like Tim Ferriss suggested in the 4-hour Body is just easy for me to do. Basically eat really clean and basic stuff during the week, then go all out on a cheat day once a week. Of all the different nutritional things I’ve tried, slow-carb has provided me with best aesthetic results given the amount of effort I had to put it.

Ferriss is just all about that “minimum effective dose.” It falls under the 80/20 Pareto Principle, where 80% of your results come from 20% of your efforts. Man…if I had a dollar for every time someone mentioned “Pareto” or the “80/20 rule” at the gym and reversed the meaning of the numbers…

…but yeah, I said “aesthetic results.” Dropping my body fat percentage is my goal right now, but it’s not easy when workouts always leave you with that hangover feeling in the end. My previous successes with slow-carb and Paleo resulted in this along with stunted progress in performance. Now I know it had to do with the lack of carbs.

There’s just that negative vibe whenever I read, hear, or say the word “carb.” Don’t some of you feel that? Especially to those of you who CrossFit mainly to lose fat and look better. I need to just let go of those fears. I’ve already let myself go for the sake of experimenting the past few weeks, so what’s the worst that could happen?

So my goals right now are to keep my protein high and to up only healthy carbs when back-loading. This should help me drop fat while providing enough fuel for those WOD’s. Gradually, I’ll figure out this puzzle that is my body.

And one last thing…this weekend, I was just like YOLO to top off these few weeks of experimenting. Had half of a homemade pizza for dinner…then I just found out tomorrow’s WOD is a 5 minute AMRAP of Fran.

I’m going to beat my time of 5:15 from nearly a year ago. During the Garage Games, I managed to get 5:23 after a full weekend of WOD’s, so I know for sure I can finally break the 5 minute mark tomorrow.

But…a 5 minute AMRAP? I’m only going to get 5 and change. Most people won’t even get one. I won’t be surprised if this WOD gets changed up to a non-AMRAP in the morning. 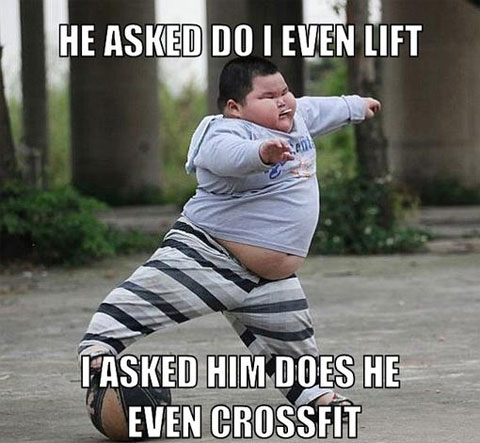 Thanks for sharing your experience with the carb back loading… It was my understanding that the back loading wasn’t necessarily carb specific, in that it doesn’t make a huge deal which source you use. Tge effect you’re describing (kinda like a swollen belly) sounds like a grain intolerance thing. I’m looking forward to the follow up with sweet potatoes, I suspect you’ll get the benefits without the gain in weight & gain in girth!

Make site you update us!!

Hey Max! Yeah, it does seem to be a grain intolerance thing. According to the Carb Back-Loading ebook by DH Kiefer (at least from what I remember), the kind of carbs are different for everyone. Some people can slam anything, while others like myself can’t. Even white jasmine rice, which Kiefer highly suggests for people struggling with grains, isn’t doing well for me.

We’ll see what happens with my modifications. I’ll definitely keep you and the rest of my readers updated!