It’s been over 3 weeks since my Garage Games competition, but I still have to finish off these posts, right? Can’t just leave ya hangin.

Here’s Part 1 if you haven’t read it already.

Alright, so day 1 had me pooped out. However, it was also alumni weekend for my college, so I knew I had to make an appearance to say what up to a bunch of friends, many whom I haven’t seen in years. Yes, that means I had like 3 beers the night before the 2nd day…oh well. Like the rest of my team, we were just doing this event for fun.

This is how the event worked. Each team has 16 minutes for max calories on the damn Airdyne. Either your pair of guys or pair of girls would start things off, alternating after how long you desire. Each pair has 8 minutes on this easy to underestimate machine. Some teams had their athletes alternate every 2 minutes, which is ridiculous. We took the advice of one of our box’s teams with the 30 second alternating strategy.

Yes, since this was a cardio-based workout, my performance wasn’t too hot, but I got through it, along with the rest of my team without stopping or slowing down. I’m tellin ya…it’s easy to think the Airdyne is a piece of cake. Yeah, you think these are weak, exercise machines grandma would use, but they’re far from the opposite.

Post-Airdyne was ridiculous. It felt like my legs were stuck in the extended position, so I went outside to walk things out a bit. Before our team went back to the parking lot to chill before Team Fran, I went back inside to grab my backpack.

I nearly stumbled into the lobby doorway like a motherfuckin drunk. Walking across the street to the lot wasn’t fun either, until we finally got to chill and shoot the shit in the lot.

I actually really enjoyed chillin in the parking lot. Before signing up, I honestly didn’t know the rest of my team, so it was cool getting to know them while trying to figure out the best way to tackle upon each WOD. It almost felt like pre-gaming for a Dave Matthews concert, except without the drinking & people dancing on the ground.

We had our fold-up chairs, some Paleo meals and snacks, and an unusual sunny fall day waiting for us after every WOD.

And Why I Still Think Fran’s A Bitch

Okay, first of all, my Fran time isn’t that great, but I love how I’ve progressed from a 25 minute, scaled Fran back in college (65# thrusters and really light Gravitron-assisted pull ups) to 5:15 Rx’d back in March I believe.

That was my goal. To beat my last PR with a sub-5 minute time.

Easier said than done, especially after a weekend’s worth of workouts. Thrusters really aren’t my thing, so even after an hour and a half break following the Airdyne event, my legs were still shot to shit. They were Jello.

It didn’t help that our heat kept getting pushed back. From heat 5, we ended up in heat 7. Team Fran allowed for only 1 barbell/1 person to go at a time with a 21 minute cap. Since I was one of the few to have done Fran before, I said I’d go first so there would be enough time for the rest of the team to get in as many reps as possible.

As I said…21 minute cap…so basically close to an hour passed after our expected heat time. I was getting nervous as fuck, doing all sorts of random fidgeting and mannerisms…yet exaggerated. Think Nomar Garciaparra’s at-bat routine on roids.

Then finally, our team was up. Just a few minutes beforehand, I actually wasn’t sure if I’d do this Rx’d, as it might cost our team a lot of time having to switch weights again on the barbell as our other guy following me was going to do it scaled. This would be his first Fran…and man what a way to start this love/hate relationship.

When I found out our teammates are allowed to swap weights while a teammate is doing pull ups, I knew I had to do this Rx’d. I wanted to PR. Bad.

But I was still nervous as fuck. It was so bad that when we were setting things up, I put on WAY TOO MUCH chalk on my hands. I didn’t want to think about it at the time, but in the back of my mind, I knew I was going to tear my hands. Oh well…#yolo

Before I knew it…BOOM. Shit began.

I got through my 21 thrusters and pull ups rather quickly and unbroken. If I remember correctly, I was at around 1:15 after the 21 pull ups. Unfortunately, like last time, my brain and body crapped out around 7 reps through 15 thruster. Shit.

It really was just a grind from then on. My body was wrecked. All I wanted to do was crash and rest. But you’re in that competition environment even if you’re just doing this for fun. The shouting from your friends in the crowd. The Skrillex in the background. The hint of crimson on your shorts.

Wait…I was bleeding? Haha no…it wasn’t that time of the month for me 😛 As I was on my last set of pull ups, just trying to get my last few reps through, I knew I tore up a bit.

All I had to do now was cheer on my team.

Oh man…I felt insanely out of it at this point. Then I looked down at my hands as I was battling through my temporary “Fran lung” breathing. Yep. And my hands tore up a lot more than I thought they did. It was easily the worst I’ve seen them from pull ups. The blood was gushing a bit. It was a beautiful sight.

For serious though. I couldn’t stand, think, or talk. For the first 2 minutes after my Fran, I had to lay out on the floor for a bit. Still…I was cheering on my teammate as much as I could. Bless one of the people from my box who grabbed some paper towel for my hands. After some clean up, I just covered my hands with the power towel, got up, and kept cheering on my team the best I could.

It truly was an electrifying moment.

We All Surprised Ourselves

No, we didn’t get to finish, but that wasn’t the point. I’m so proud of my team and what we accomplished that weekend. Going into this competition, we all had some mental limits on our CrossFit and general athletic abilities, yet in the end, we all finished with something that surprised us.

For example, my teammate Bob who went after me in Fran actually Rx’d! I had no idea since I was in the middle of my pull ups when he decided not to switch up his weights. Huge props to him. None of us were able to remember when he started and finished since we were all caught up in the moment, but from what I (barely) remember, it was something in the 7-8 minute range. Really solid for a first Fran. 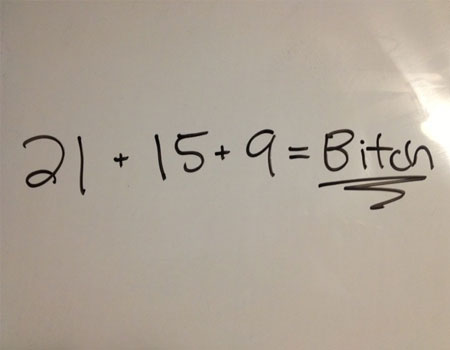 So Garage Games Next Year?

You may have not gotten your PR, but honestly… you should seriously consider it a PR because your legs were already shot!

On my set of 21’s, I finished at around the same time as you, but I didn’t slow down as much. Try to really focus on just going smooth your first 21. I often find that I’m super excited/nervous and will end up rushing myself and charging a little bit too hard in the beginning. Just a thought really!

Airdynes make me sick haha…used to have to use them in college wrestling all the time. how many calories did you get? i know rob macdonald at gym jones has gotten 403 calories in 10 minutes…what?!