…this was what stood out to me during the first day of the Garage Games New England Throwdown.

There were porta potties lined up in the back of CrossFit Milford. And of course, each and every workout brought about some bouts nervousness beforehand. So I had to piss, sometimes even multiple times before a WOD.

I noticed one girl opened a porta potty, only to quickly move onto the next open one. It was pretty obvious what was behind those doors, but I just wanted to get things over with. That’s how bad I had to piss. That’s how pretty damn nervous I was.

I encountered Jabba the fuckin Hutt. Mannnnnn…so this is what a legit Paleo poop looks like. 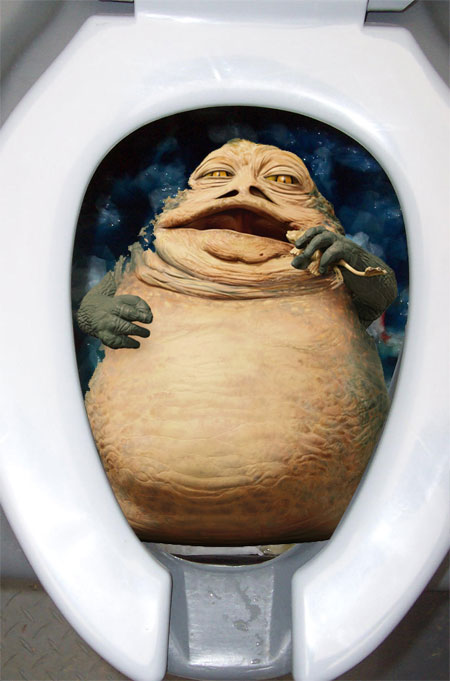 Got out of there ASAP.

Okay, about the actual Garage Games. What an experience! Sure, the wait times did get nerve-racking, but once you were there and in the zone, adrenaline and the energy of the crowd took over your performance.

“A guy from the other team who was a better lifter than me found the audience distracting and failed to complete his last lift. He told me afterward that he couldn’t concentrate as well as in the gym. For me, it was the opposite. The audience gave me strength and motivation, and my ego kicked in more. I discovered that I performed much, much better in front of others.”

The same rang true for myself.

For example, with the first WOD – 12 minutes total for your whole team to get a 3 rep max overhead squat – I shot up that weight from my back to overhead easier than ever before. Usually, the awkwardness of going overhead from the back would hold me back. At times, I would mess up the lockout.

The ease was all thanks to the crowd. Despite hearing friends of mine yelling my name and random shit to get me amped, it was like I was somewhere else. I tuned out all that stuff out, even with the environment naturally fueling me.

It’s almost like that feeling of studying or getting work done at a Starbucks. The people might be loudly chatting about the latest iPad mini or some fixed-gear bicycles and the noise of the coffee machines might seem distracting, but seeing other people “getting things done” can inspire you to get shit done yourself.

Sure, I didn’t get to attempt my goal of 185# since time ran out, but I was pretty stoked with my 155# as it was smooth and easy and I’ve never attempted a 3 rep max that heavy. OHS used to be a HUGE weakness of mine, mainly because of flexibility issues.

Now it’s one of my favorite lifts…also rocking a pair of CrossFit shoes helps.

Yeah, my 2 mile PR with 16:57. As you all know, I fuckin hate running, so I was pretty damn happy with that time lol.

We pretty much ran around the block where the gym is, a path which had some inclines and declines. In the final quarter mile, I kept hearing some dude’s heavy breathing behind me. Things were getting too close for comfort.

Avoiding the creepiness was my motivation to not let this fucker pass me haha. That was really my only goal during the run, aside from getting around 17-18 minutes. It felt so good to beat my expectations.

And Then There Was A Chipper

As much of a bitch this chipper was (even for the scaled division), I really appreciated it. The programming I’ve been experiencing over the past year and a half or so has gotten pretty complicated and the volume has gone up, so it’s pretty sweet to experience a classic CrossFit chipper.

If you want to see some pics, check out this page:
http://saintclairstudio.smugmug.com/Crossfit/Garage-Games/CrossFit-Milford-New-England/26132752_C6Pnfd#!i=2171975081&k=Dmv3zGX

By the end of that 3rd WOD, my body was spent. I had no idea how the hell I was supposed to deal with the Airdyne and a Team Fran the following day. If you were to ask me to do all these workouts in a span of 2 days before this, I would’ve laughed in your face.

Competitions like these, even if you’re doing them for fun, show you that there’s more in you than you think. It’s pretty interesting how much your mind limits you. Your own mind is probably your own worst enemy. Then you hear all this talk from CrossFitters around you saying “OMG TOMORROW’S GONNA BE TERRIBLE”…”I’M NOT LOOKING FORWARD TO THIS”…”I DON’T WANT TO DO THIS SHIT TOMORROW”…

And that’s what I did lol. Since my college’s alumni weekend was going on last weekend, and I managed to get out earlier than expected, I was just like #YOLO and caught up with some old friends over a few beers.

Don’t worry…I didn’t get shitty and it definitely didn’t affect my performance (too much) the next day.

So how did the Airdyne and Team Fran WOD’s go? I’m saving that shit for tomorrow. Cause it was more than just a battle with myself and my body. It was more of that mental game.

What was the chipper! Congrats on the PR!!

Just ripped that from one of my last posts…we did the scaled weights (same number of reps). Don’t remember the women’s weights, but for men, the cleans were 135#, 95# for the shoulder to overhead, and 65# for the power snatches.

I was there also competing, the chipper was something else even though my team didnt even make it to the snatches…overall I felt the programing was great…

Yeah the programming was legit. I’ll admit when I first saw the WOD’s, I thought they would be too basic. But as you and I experienced, that was NOT the case haha.

Def. not the case..haha…Was worried about the run myself also b/c the most running I do is during WODs