I Used To Get Butterflies Before Every WOD

Working out on my own before joining the box was a whole different story. I was still picking up the basics, so I had no pressure. In the class environment, however, I actually got butterflies before every WOD. True story.

But…wtf? Why? I honestly don’t know why. There must be many reasons, and I’m sure I wasn’t alone. I was just talking to one of my buddies in class, and he was saying the same thing. Sure, I still get nervous in a competitive-like environment when your whole box is throwing down for something like the Opens or Garage Games or something along those lines. It just happens, but once you go for that first rep of a movement, it’s all good.

Really. What could it be?

This is a big one. When I used to go to a globo or work out at the school gym, I was always conscious of the “lookers”. That’s one of the reasons back then I kept to pretty standard lifts or movements I was comfortable with. It was bad enough trying to learn the basics like squats and cleans. I didn’t even attempt learning stuff like snatches (ha…ha…) until I joined the box. There’s just that fear of what people would think of me trying a weird movement with just the bar or with barely any weight. 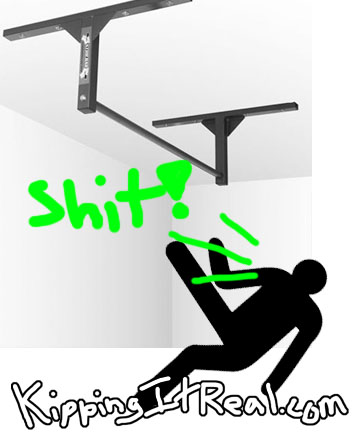 Yes, I've fallen off the pull up bar before lolz...

It was the worst at my school gym. Just imagine all these Jersey Shore-type guys constantly staring at themselves in the mirrors when they’re not giving you weird looks when doing CrossFit workouts lol.

I suppose that kind of feeling stuck with me a bit even once I started CrossFitting in a class. You see all these ridiculously good looking people in your class lifting those weights and moving their bodies in crazy ways. They make it look like nothing. You’re afraid of what they think of you starting out.

I See It In Others As Well

Whenever I see that newbie trying something like a clean, only to awkwardly curl it up, drop it, then look around to make sure no one saw their bungle, I see myself in him or her. That was part of the learning curve for me: to not give a shit. Not giving a shit is the key to opening SO MANY doors in your life. It’ll help you take down that initial mental barrier to reach new heights, whether inside or outside the box.

Here’s the explanation of the WOD:

Just a little background, there are a few CrossFit boxes in my area, so they alternated each Saturday to host the opens workouts. Admit it. There’s nothing like working out at your own box. You’re in your element: the box’s setup, the equipment, the crowd. It’s your comfort zone. Doing a WOD at an uncomfortable weight for you in a new environment was um…uncomfortable 😛

165# is over my bodyweight, so having to get that overhead is no easy task. I was still pretty new to squat cleans at the time as well. Things weren’t looking too great for me.

I got there early to register and warmup, so there weren’t really a lot of familiar faces. I just kept to myself as I stretched and whatnot. Yeah. I was pretty fuckin nervous all things considered. The turning point for my nervousness before WOD’s came when I was chatting with someone at my box who was competing as well. This guy’s a firefighter and a beast at CrossFit. I believe he made our affiliate team this year.

So I just said to him, “I don’t know man…I’m feeling pretty nervous about this.”

His words pretty much changed my whole perception on the pre-WOD butterflies, “What’s there to be nervous about? You’ve made so many improvements in what? The past year? You have a lot to be proud of. The gym is proud of what you’ve done as well. It makes the gym look good that you’re here competing. And just have fun. Did you picture yourself in this position a year ago?”

That really flipped the switch for me. It was at the perfect time as well. Right before an Opens WOD? So perfect.

I didn’t hit the 10 reps I was hoping for, but I still gave it my all. After that, my perception of CrossFit workouts completely changed.

It’s easy to forget about that, right? 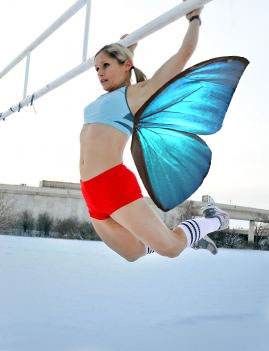 Because of that peptalk and also my pre-workout chitchatting, I no longer feel those butterflies. It’s just another workout. If I totally fuck up a movement or look really awkward doing something, I don’t care. Everyone makes those mistakes. Everyone starts somewhere. This one time during a real burner-type WOD, I fell on my back during thrusters. Before, I would’be been embarrassed, but I just got back up and finished off the rest of my reps.

Failing is part of the game.

If You’re New To The Class Environment

Or even CrossFit in general, don’t worry about messing up lifts or movements. Don’t be afraid to start off with really light weights to learn the basics properly. Most guys don’t get this and think that someone just starts deadlifting 405# out of nowhere. Everyone started somewhere, right?

Getting those things out of your mind might get rid of those butterflies. This is a great mentality as well for people who want to start CrossFit but are intimidated by the class environment. We may lift heavy-ass weights, grunt, moan (uh…), and yell while we do, but we’re just everyday people. We kip it real and welcome newcomers with open arms 🙂

I walked into CrossFit December 2011 just a mere 18weeks ago(4weeks on ramp)…46yrs old, 40lbs over weight (now i am only 20lbs over…YEA!), i had knee surgery 1.5 yrs ago( i didnt realize how weak the surgery left me and PT did not help) , single with 3 kids, and I work the “Night Shift” 6 nights aweek! I am Shy by nature but put all of that on top of i am 1 of 4 women over 40( that i am aware of ..1 started a month before me and 2 after me) in the box i work out at and the closest in age to me is 8yrs younger. It can be very intimidating( hence the nausea) when ur last..dead last, in my own time zone last…everything needs to be modified! But in the last 2 weeks all of a sudden my body is doing amazing wods, amazing for me that is..the coach has upped my box height, increased my weights and i am starting to feel like Wonderwoman cause i can complete more WOD rounds! I am pleased i am starting to come in with the pack! I realized day 1 that i cant let my fear get the best of me, i have goals i want to achieve and if i put in the hard work i will be better stronger faster! I am new so i cant compare myself to the other Crossfitters in my box…so i set goals for me each WOD. At first it was just to survive the WOD! now i go in ready to achieve better results than the day before! so when last saturday i recieved a “great job with your progress” email from my coach, it was truly a beauty pagent moment and i was shocked and i cried…yes i am a girl! I know how much i have changed, my kids have noticed how much i have changed and the my fellow CrossFitters have noticed and told me.. how much i changed…it was icing on the cake when the coach put it on “paper”! At CrossFit the Coaches and my fellow crossfitters have been soo supportive, encouraging, motivating have always made me feel a part of the crossfit community…no matter my skill level!! Now I have new women coming up to me and telling me how amazing i did and i am encouraging them…truly if i could do CrossFit anyone can!! NAUSEA… BE GONE!!

Elisa, that is so awesome!

Honestly, I don’t know where to begin with this response. Even as a guy, I’m willing to admit that your story has touched my emotional side. This is what CrossFit is all about, folks! It’s about getting you out of your comfort zone and becoming the best version of yourself, the person you were meant to be.

Keep setting those goals and keep crushing them. You know it’s a gradual process, not an overnight kind of thing. With that mindset, you’re already ahead of so many people out there.

Amazing. It’s readers like you and comments like yours that make this blogging journey here so worth it.

Thanks for this post ! I am about 2.5 months in, and almost wanted to cry and give up today. I kept messing up the hang snatch , and I was embarrassed especially in front of the owner…I learn through doing something over and over , and it just didn’t click…..I love crossfit, but hate feeling like a failure. Thanks for your pep talk!!!