The Difference Between Failure And Failing

First of all, I just wanted to say that I’ve been a fan of Lisbeth Darsh’s blog posts for quite some time. They’re short but sweet. I guess we all have different styles of writing, as I’m all about pounding out a lot of words as they come into mind.

Maybe I’ll try out some shorter blog entries and see how people react to them.

So I’m referring to this post from Lisbeth’s blog that really struck a chord in me. In recent years, I’ve been all about losing my fear of failure. It’s that fear that has held us back in so many things since we were young.

You can thank school for that 😛 Okay, while I think it’s great to have a solid education, and I also believe you can be successful with or without it, the way school works sets many us up for paralysis later on in life. 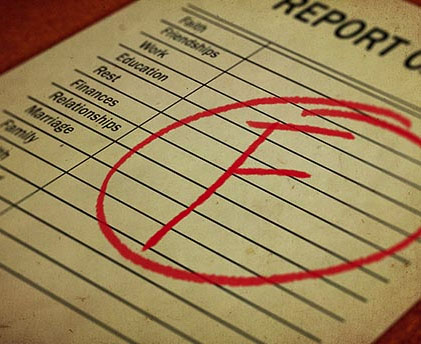 Whenever you hear the words “fail”, “failing”, or “failure”, you think of getting an F on a test or a report card. All you thought about was avoiding that F and getting those A’s. In elementary school and most of high school, I was an overachiever, so sometimes even if I got an A- on something, I’d flip a shit. That simply stressed me out and got me nowhere. All I thought about were the grades and not failing.

That mentality of avoiding any failing whatsoever held me back in so many aspects of my life. I didn’t tryout for the baseball team in high school cause I thought I wasn’t good enough. I wasn’t as friendly and outgoing since I was afraid of what people thought of me. I was afraid of taking any risks.

It wasn’t until college that I realized it’s okay to fail as long as you learn from your mistakes. Initially, I thought I was starting to become a fuckup in academics and in certain social aspects of my life, but it was through those mistakes that I matured into the person I am today. If I didn’t take those risks then and now, I’d probably be too afraid to walk into a CrossFit box. For real.

Failure is an end state–a finality, an acceptance of failing. But as long as you’re still trying, you’re not a failure.

That right there summed up years of my thoughts on learning from my mistakes. Failure is the end of a journey. It’s when you give up and back down. Failing is just part of one that’ll continue to move forward. You dust yourself off and try again 🙂 (RIP Aaliyah)

Reading that post on Lisbeth’s blog brought back many thoughts and events from my past. If I didn’t start facing fear head-on, I don’t know what would happen to me. I’d probably be miserable.

Fortunately, CrossFit came at an important time in my life and flipped my world upside down. Yeah, it was a rocky start, but my life’s a whole lot better because of it.