10 Ways To Be Funny In Your CrossFit Class

Okay, this isn’t for you natural jokesters out there. Shit just comes out of your mouth and people laugh. We know. However, there are some CrossFitters out there who might want to crack some jokes to break the ice, especially when they’re new, so here are some things you can try out. Just note that it all really depends upon the crowd you’re around and the coaches you’re joking around with. Use your own judgment.

And you might totally bomb with your jokes. It happens to me all the time. Whatever. Just have fun with it 🙂

1) Defining Acronyms or Starred Out WOD Names
I don’t know why, but the owner of my gym and many others out there love using acronyms for their WOD names. The day that “YOLO” becomes a WOD name, I’ll fuckin die (it stands for “You Only Live Once” for those not in the know…thanks Drake).

Anyway, when coach is done explaining the WOD on the whiteboard, I innocently raise my hand and just ask, “Um…what does AFAFP mean? or “I can’t read that (F*CK)…I can’t seem to decipher that word…what does it say?”

One time one of my friends just called me out and was like, “Haha you just wanted him to say “fuck” out loud.”

Well, he was right lol. 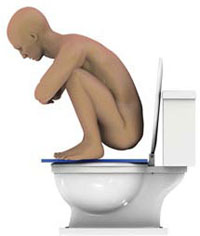 A friend of mine did this to me, so we’ve been doing this to some coaches ever since. When coach would be demonstrating some sort of squatting movement, once he or she reaches the bottom of the squat, I’d make a fake farting noise. Sometimes coach knows it’s coming so he’ll just call me out, “C’mon man…excuse yourself!”

Note: Don’t do this to other people when they’re actually doing a squat movement with heavy weight. If I were squatting with some weight and you made that noise, I’d crack up and potentially fuck myself up haha.

After coach goes through the entire workout and asks if anyone has any questions, just ask, “So what’s the workout again?”

Whenever recent WOD’s are pretty rough on certain areas of your body, coach would ask if anyone’s feeling really sore or tight there. The other day I was like, “Yeah man, my chest is pretty sore. It’s pretty tight. You wanna feel how tight it is? You wanna touch it?”

I say all this random stuff with a straight face. That’s key.

5) Coach Wants You To Write Something On The Board

For some reason in my class, no one writes shit next to their names on the board. No times, weights, or scores. Seriously, wtf, guys? That’s why our coach would joke around saying, “Hey can you guys write something on the board for me so it actually looks like I’m doing my job?” 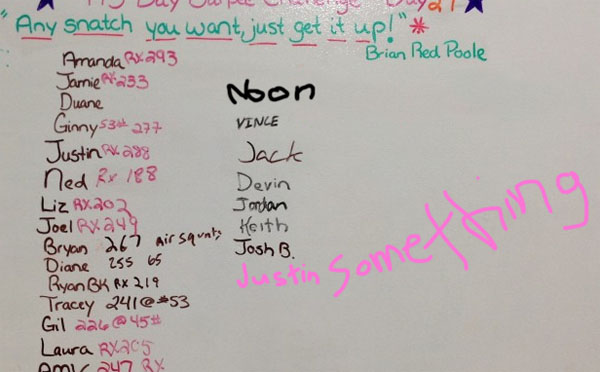 Yeah, I tend to be the only one at times, too.

6) Show Coach How You Feel About The WOD

This depends on the coach. The WOD also has to be one of those total “I want to roll over and die” type of workouts. Basically, I’ll just walk up to them and pretend I’m throwing up with sound effects and hand gestures to help me out. Good times.

Is it just me, or does almost every box use Pandora for their music selections? Yes, this music site has improved SIGNIFICANTLY over the years, but it still has a few hiccups. So I’ve noticed that our gym generally plays rap/hard rock/top 50 kind of music. Just imagine being in the fuckin zone and then…

Of course, coach has to run over to the sound system to change the track. So I either say something like, “Hey c’mon! That’s MY SONG!” or “Sweet playlist, coach!”

You know what I’m talking about. These jokes will never get old, and it’s funny how people twice my age continue to crack them. I hope to grow up like you guys. You’re my heroes.

Actually, I don’t really plan on growing up. I’ll go through the motions of having a family and whatnot, but I’ll still find these box, snatch, and clean and jerk jokes hilarious.

Whenever someone in the class or coach mentions one of these words or phrases in a serious way, I can’t help but laugh, fake choke, or emit my signature male giggle. Yes, I giggle. It’s my thing. Haters gonna hate 😛 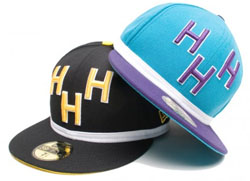 Okay, readers like Elisa and other females have an advantage here cause you can well…joke about your boobs…and get away with it. She commented yesterday on our Facebook page (LIKE US if you haven’t already), saying she joked around with her class about how hard it is to do burpees with boobs. It’s expected the guys would be laughing.

Yeah, I’m not afraid to say that cause it’s the truth. The owner of my box (haha…not that kind of box…) mentioned the 3 H’s during a Paleo challenge meeting. You’re doing things right with your nutrition and overall health if those 3 H’s are in place…okay, with that out of the way, back to my last item on the list…

10) Getting Closer To Coach

This one right here is one of my favorites, and you can’t overuse it. You gotta spread things out over a few months lol. You know when the coach would ask everyone to gather by the whiteboard and people end up a bit too far from him or her? Coach would then have everyone get closer so everyone can listen.

I get close enough to coach that it’s slightly uncomfortable, then just carry on listening and looking at the whiteboard as if there’s nothing wrong. You gotta be “serious” here haha. If coach finds any unusual with this or jokingly questions me, I’ll seriously ask, “Oh, what’s wrong?” 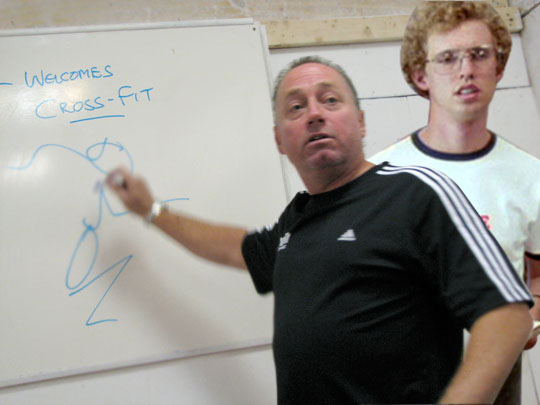 Too close for comfort...

My humor’s all about sarcasm, acting clueless, busting balls (with its limits), self-deprecation, deadpanning, and awkwardness (think Napoleon Dynamite).

Alright, maybe you didn’t find any of these things funny. Maybe you won’t try these things out. Maybe you just want to carry on with your CrossFit classes without saying anything. I just wanted to put this stuff out there cause maybe there’s someone who likes joking around with their friends or in certain groups, but feels too new to the people in your class to really crack any jokes. This’ll get your ideas flowing.

Breaking the ice in your class can really reduce any anxiety or nervousness before a WOD. The fun environment of my noon class is one of the reasons I keep showing up. And if you keep showing up 3 to 5 times a week, you’ll be kicking ass before you know it. You’ll get that first kipping pull up. You’ll nail that huge dead lift PR. You’ll continually surprise yourself.

Keep showing up. Keep having fun. Kip it real.

One of the reasons i like your blog is because you write down , what i am thinking in my head in a very entertaining and funny way!! In CrossFit we train hard and laugh harder!! I know first hand as an emergency room nurse that life is truly too short not to laugh, be silly and have fun!! So i am Proud to join the 3 “H” club with the rest of the CrossFitters !!

That’s just how I write 🙂 My goal with my writing is to blog about the things we CrossFitters think about but tend not to vocalize. I want to be able to relate to the majority of CrossFitters out there and show people that you’re not alone with your craziness and obsession.

And yes, the 3 H’s club is pretty sweet haha. It has its perks!

Loving the blog! I am very new to crossfit, I actually go to my first class tomorrow so I’m pretty pumped. I am in pretty bad physical shape, so we’ll see how pumped I am tomorrow at 6 lol Anyway, I just wanted to give you props for keeping up with this blog! I will be following it throughout my crossfit journey.

Thanks for dropping by and reading!

Hey, no worries about the current shape you’re in now. We all had to start somewhere. Best of luck tomorrow! Keep me updated with your progress 🙂