Not Even Hurricane Sandy Could Stop Me…

…from CrossFitting of course.

Yeah, shit got pretty bad in my area – power was lost (the least of everyone’s worries), homes by the coast floating away, and places we cherish absolutely destroyed.

Fortunately, our house only lost power for 3 days. No biggie. Honestly, it was actually a great change of pace. Since I couldn’t work, I simply read, ate, relaxed, and CrossFitted. The things I had were luxuries compared to the stuff most people had to deal with.

Which is why I found it pretty ridiculous that people would call into local radio stations complaining they couldn’t watch the previous night’s football game or wrestling match. Cool story bro. People died, are homeless, and don’t have the bare necessities we take for granted every day.

I just felt very thankful that my friends and family made things out okay. Last year because of Irene, my friend and business partner at Weekend Swap had a HUGE tree branch go through his bedroom.

So What About This Workout?

Alright, so I chose to stay home on Tuesday rather than venture out on roads scattered with electrical wires and tree branches just to hit up the box. We didn’t have power there, but some really dedicated athletes hit up a 6:30am class with only a truck’s headlights in the garage doorway as light. Some pretty cool stuff. 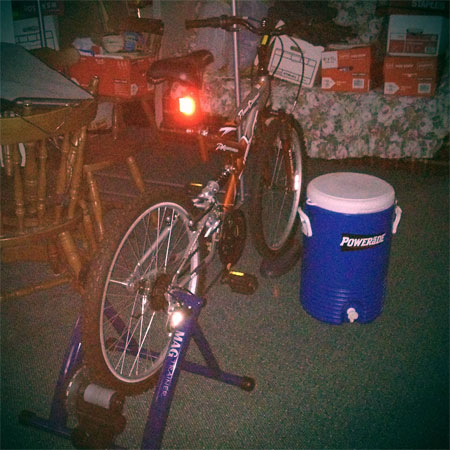 Sounds like a mouthful, but they weren’t that complicated. Basically, I’d hold the cooler (the ice was for keeping our food cool) by the handles, clean until I have the hip extension, then bear hug that cooler into a squat…repeat.

And why strict pull ups? Well…I wanted more of a challenge and kipping just doesn’t fly with an Iron Gym. 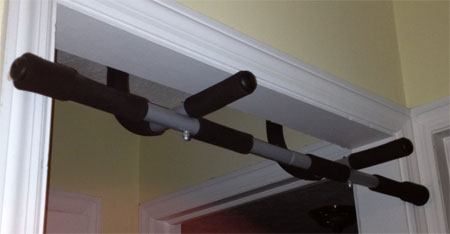 There are 3 problems with kipping on this pull up bar setup:

1) The bar most likely would fly off.
2) The doorframe is too narrow for some crazy kips (I’d clip my elbows…or maybe my elbows are 2 pointy :P).
3) The bar’s too low to the ground. I pretty much only butterfly now, so my feet would hit the floor when I’d kick my legs (even though I’m short haha).

With all the people online and on the radio bitching about really small things regarding this hurricane, I knew I had to turn off that noise. It’s funny/weird how much we were able to post things online despite the lack of power. And as I said, that’s the least of our worries.

Being in a really fortunate situation, I knew to make the most of it. I’m sure there were people also complaining that our box wouldn’t open at certain times or our owner wouldn’t post some at-home workout. Uh…he has his own family to take care of…

There’s always a way to solve these small problems or avoid them. Just think differently. I’ve probably said this before, but since I love it so much and have applied it so much lately, I might as well say it again…when people zig, you zag.

Any of you east coasters still battling with the aftermath of that bitch Sandy? Let me know what’s up.

Dude
Thats a pretty legit workout right there, and not many people would have done that. The gatorade cooler cleans… thats real life fitness right there! You should call this workout “The Waterboy”.

Oh and yeah I’ve been doing more strict pull ups lately, butterflies have been tearing my shoulders up! I tried doing kipping toes to bars (well..door frame) with the iron gym once…and I’m sure you can imagine how that ended…

Haha “The Waterboy.” I dig it.

Oh yeah…kipping T2B on an Iron Gym…good luck bros. I’ll never forget learning kipping pull ups in my townhouse in college. We had a snow storm so the campus gym was closed. It looked like I was convulsing on my housemate’s Iron Gym. I had no idea wtf I was doing lol.

glad to hear you’re keeping things in perspective. people’s ignorance pisses me off sometimes. way to improvise with your WOD. my area wasn’t hit too bad but it was a bit nasty monday morning. with that said, i dont think ive ever seen my box that busy for a 630am class. most likely people were trying to get in before shit really hit the fan. kip up the good work.

Thanks, Tom! I was just doing what came to mind. Glad to hear things weren’t too bad for you man.