I Was So Pumped

First of all, I was watching this video to get a preview of what to expect in this weekend’s Southeast South Central, and Canada West Regionals.

How badass are all these videos on games.crossfit.com and on the CrossFitHQ YouTube account? The production values are soooo sweet. It’s amazing to see how far CrossFit has come in terms of videos over the years. That’s a combination of the rapid advancement in technology and the monies that HQ has to support them. 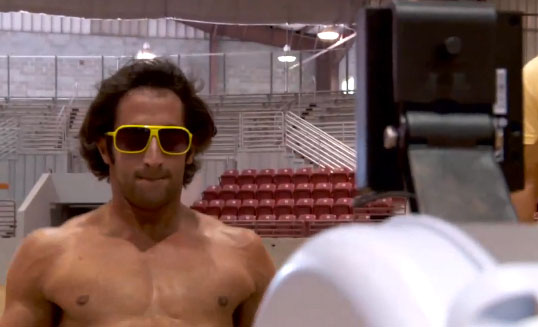 Like any other Kool-Aid drinker out there, I was amped. Hearing the music in the video above and just seeing CrossFitters get at it…damn…I wanted to workout, even though of course, I’m pretty much ready to crash and hit the sack.

Then I Saw The Latest Games Site Update 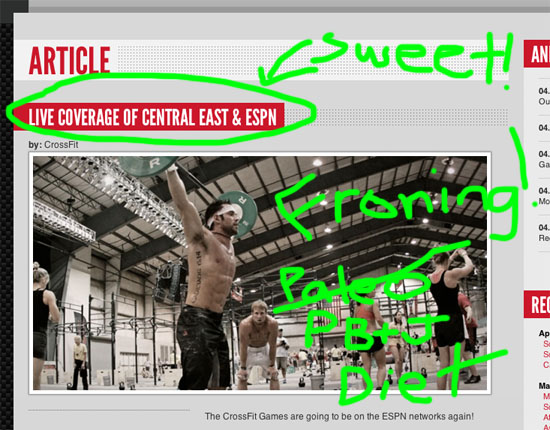 Every time I see Froning, I think of his peanut butter and jelly diet lol

Sure, I’m more interested in watching the North East Regionals live (dropping more info about myself…), but it’s great to watch all the beasts and beastettes (yeah, I know that’s not a word…) from the Central East region. You’ve got Rich Froning, Graham Holmberg, Dan Bailey, Julie Foucher, Lindsey Smith, Michelle Kinney, and a bunch of others, so you know it’s gonna be one excellent performance after another.

Then I read it’s only on ESPN3.

You gotta be fuckin kidding me. Seriously? I ran into this dilemma last year with the games, as I really wanted to watch the more polished coverage that we got to see months later over and over again on ESPN2. No dice. Yeah, you get the stream free of charge online…

…as long as your cable provider is one of the participating companies. Well, I have Cablevision/Optimum, and yeah, I was out of luck.

Hoping that MAYBE things have changed in the past few months, I went on the ESPN3 website to check things out. Here’s the message I got after putting in my zip code (no, I’m not giving that out haha) and picking “Cablevision” in the dropdown box:

That’s just one Regionals event, and the videos for the Central East will be replayed on ESPN3.com. I’ve also read on random college sports forums that sometimes you don’t even need an account to watch certain games on ESPN3, so hopefully something like that will happen for the Central East Regionals. Probably not since those forum posters had no idea what the hell they were talking about haha.

At the end of every day, there’ll also be your usual Update Show hosted by Rory, Pat, and everyone else. So expect some more commentary on their commentary.

…I’m going to dig through the darkest depths of the internet to find Regionals information as things are happening. Right now, I don’t really have a plan of how to do this, but I’m pretty good at Googling things. Like, for example, I was able to find out one of my college friend’s high school friends was actually a huge scam artist, tricking amateur athletes into buying her gifts and shit…anyway, that’s a story not for this blog lol.

Of course, I’ll be following the Regionals Twitter accounts that’ll give a play-by-play of what’s going on. That’s a given. Think of me as your Cliff Notes/Sparknotes for the Regionals. Then I’ll dig through the Twitter trends. And who knows? Maybe there’ll be some legit bloggers or Twitter people at the events posting about up-to-date shit.

As I said, I don’t really have a solid plan right now, but I’m going to make it happen. For you guys 🙂