There’s a chance that you’ve probably seen this vid already, but “Bad CrossFit Gym Etiquette” is a good one. I love it cause a lot of these “characters” at the gym do show up.

I’m sure most of your boxes simply have some honor code where people actually pay for their coconut water or leave cash if no one’s around at the desk. If you’re actually stealing stuff from your own box like this…well…that’s fucked up.

Sadly, there are probably some low-life peasants out there who pull this kind of stuff all the time.

Okay, when I started CrossFit, I’ll admit I was quite a chalk abuser, although maybe not to the status of “chalk whore” (maybe “chalk skank” or “chalk ho”). Shit finally hit me when I was constantly complaining about tearing my hands during pull up or toes-to-bar/knees-to-elbow WOD’s. Coach was just like…”Uh…the chalk’s just making things worse.”

Now I really only chalk up for 1 rep max cleans, snatches, or deads.

And I don’t know about you guys, but did that chalk whore in the vid remind you of Tyrone Biggums from Chappelle’s Show? 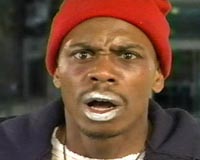 Andddd…one last thing about this section…props on the video editor for throwing in Muse’s “Plugin Baby”…one of my favorite songs in high school.

Too Fast Too Care

Fortunately, I never really see these guys or girls at our box. Our coaches are legit, so of course you’d be called out for this kind of nonsense.

Yeah…I sweat like a mofo, so of course I try my best to clear off my stuff post-WOD. Although I do forget at times, especially when it’s a total MIND-IS-FULL-OF-FUCK type of workout and your brain is scrambled to shit. 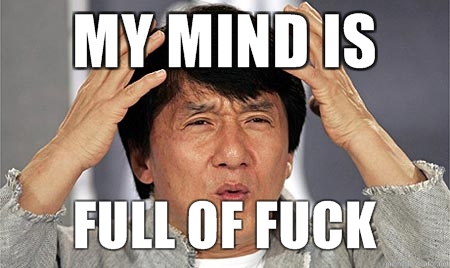 Even in my car, I wipe down my seat, steering wheel, and arm rest once I get home. No one wants a car that smells like mold 24/7.

Haha…I really enjoy this one cause whenever this one friend of mine is in class with me, I end up talking or bullshitting along with him, sometimes when coach is explaining something.

Now, things have been reduced to random side comments to each other, although coach will call one of us out once in a while.

When I know it’s something that could take a while to explain, you know…like a WOD that requires the order of operations on steroids to dissect, then I keep my mouth shut or just try to ignore my friend’s nonsensical random.

The guys in this part of the vid were great, especially the wall ball scene.

I don’t really see this stuff happen, although the flying barbells or variations have come close to fucking me up big time. I’ll never forget this one time I was doing Helen for first time Rx’d, and I was on a pretty good pace, but this one guy doing farmers carries didn’t put clamps at the end of his bars.

Of course, as he was walking behind me, I saw from the corner of my eye one of his 45# plates slip out, cause his bar to tilt forward in my direction. Yes, I did end up tossing my kettlebell overhead a bit like the guy in the video while I hopped out of the way.

I wasn’t pissed at all…rather, I was happy that bar didn’t hit me. That could’ve been some bad news bears.

Lmao that was awesome.

Nope, can’t say I’ve witnessed this…oh wait…I have! In the middle of a WOD, woman took my wall ball one time…it was a 20# too. I simply turned to our coach, and mouthed, “What the fuck? She took my ball!” So I was forced to go to the carousel of balls mid-WOD. Not sure what happened to her original ball.

Oh man…there are some pretty douchey people out there who do this. C’mon now…the only person you’re really cheating here is yourself. Oh, you want to brag about your new Fran time to your wife or co-workers?

In the grander scheme of things, unless you’re going for a “new world record” or legit competing in the Home Depot Center, no one gives a shit about your times or your scores. Yes, people do care that you’re working on improving your health and your life overall. That’s because most people at your box are pretty awesome and want to see you make progress.

But making up your times, scores, or weights is just a waste. Hold some standards for yourself. It’s the only way you’ll improve.

Do You See Any Of These Mofos At Your Box?

Also, if you haven’t already, join my newsletter through the form below! The FIRST EVER weekly update will be released this weekend.

Gear borrower and time fabricator are the worst ones. Well, our coach records our times for us but some people say they did it Rx and then get a Godly Elite Fitness Lonnie type time and you know its just BS. Theres one guy at my box who NEVER extends at the bottom of his pullups, and one day we were doing Cindy and he told our coach how many rounds he got and coach goes “so zero and a bunch of squats and pushups?? I no repped you on every pull up.” hahaha it was pretty great.

Our coach used to record times for us…then our classes just kinda blew up in size. Hahahha I like that…”Godly Elite Fitness Lonnie type time.”

Wouldn’t not extending your hips on pull ups get tiring on your abs after a while? But yeah that’s great…all you can do is LOL inside.

i am the” Sir talks alot” and got called out on it by the coach tonight when he asked me what the warm up is and i couldnt repeat it …so freakin funny. i just said sorry coach! i do try and be respectful that they are teaching not only me but others in the class. i have seen some guys who are the time fabricators but my coaches are very quick to call them out on it…love it!!

Glad to see coaches calling that shit out! It’s ridic…they’re only cheating themselves lol.

I can definitely see you as the “Sir Talks A Lot” for some reason.

Had to chuckle at a couple of these. Been a gym rat for a long time and have met a couple of these there. I’m starting crossfit next week at a local box so I’m doin some light reading to maybe prep me on what to expect. Did my trial last week and I’ve got to admit those 8 minutes took a lot out of me lol. Love the intensity and I’m looking forward to some new workouts.

Oh and just a suggestion, cause I really like your blog and run a couple myself. You might want to add a sharebars in here so people can like you on FB, tweet your post, or google plus them. Just search for it on “add new plugin” if you’re using wordpress. I was looking for a like button and couldnt find one lol.

Kumusta! Sweet blog you got there man.

That’s awesome that you’re starting CrossFit next week. If you have any questions about it, feel free to ask here or contact me:
https://kippingitreal.com/contact-me/

Yeah, I actually did have a sharing plugin, but the javascript slowed my site down way too much. Do you have any suggestions on plugins to use? Something that’s light on load times?

I use the sharebar plugin that’s the most popular one. I don’t really feel like it slows my blogs down and they definitely help a lot in terms of non google traffic. My new blog (the one linked on my comment profile) gets about 1/3 of its views (still small though since its just 2 months old) from facebook. My crossfit trial article got shared by crossfit inssurrecto’s (my local box) fb page too and that really brought me a lot of shares and tweets. So I really think every blog should use share buttons. I use this one FYI: http://wordpress.org/extend/plugins/sharebar/

And since google is starting to factor in (or i think they maybe already have) social media signals into their ranking algorithm, there’s really no reason to not use them.

If you dont like the scrolling sharebars or they mess up your design, you might want to go with the default jetpack share buttons if you’ve got a wordpress account or if you dont mind making one. They’re a bit smaller than the scrolling sharebar so they might have less impact on your loadtime. The jetpack plugin also has a lot of other options that come with it like traffic stats, mobile viewing optimization, etc… Your blog is pretty clean though so i dont think a scrolling sharebar would hurt you that much.

Plus you can always edit out the useless buttons. Like in the Philippines twitter and FB are prolly the only two buttons that matter. But I added G+ on mine since I think they have potential to grow. So that’s just three buttons on my scroll bar.

You might not get a perfect score on a loadtime check with sharebuttons integrated into your blog, but I think the benefit they bring outweighs the loadtime hit (prolly negligble anyway) they have.