First off, I just want to say that following the Regionals is a nightmare haha. Between the Tweets and all the event summary videos, the stream of content can get rather overwhelming. There’s nothing wrong with that of course.

To think a few years ago, there wasn’t even close to this amount of coverage. The closest you got was play-by-play Tweets from hardcore fans in the stands.

Originally, I thought I could follow everything and write about it. Then again, I realized that’s not really my place. The official Games site has you covered for that. If you’re on Twitter, I highly suggest you follow this list of Twitter accounts. That way you get up-to-the-minute updates of whatever’s going on in a Regional event.

The official Games site has this page for Regionals summaries that go over each event in each Region. Then there are also your daily updates from Pat and Rory. I’ll admit though…something’s missing. Sure, the update for Week 1, Day 3 isn’t up yet, but I feel they need another co-host on the show. The dynamics were great for the Regionals preview show with three people, so why can’t they do something like that again? Just my 2 cents.

Here are the Update shows for Day 1 and Day 2:

Oh…right! Okay, here are the athletes and teams from this weekend that will be advancing to the Games in Carson, California in July:

And one last thing…

Sure, there’s lots of hate on Rory’s bow tie, especially in the YouTube comments for the Day 1 Update. I honestly find nothing wrong with that. The guy’s just doing his thing.

However…as a guy who had to wear a tie and dress shirt throughout high school, this bow tie/shirt combo bothered me in the Day 2 Update… 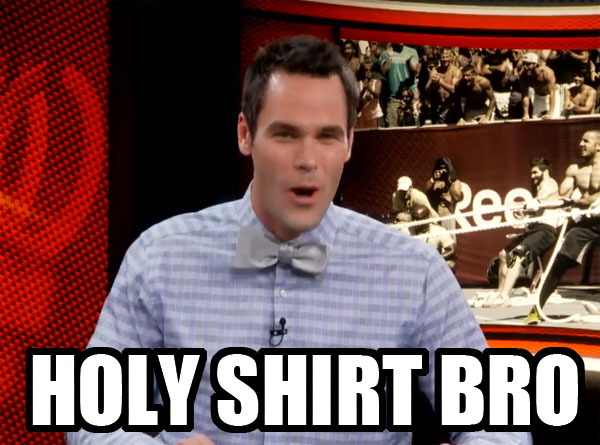 No hate...the shirt just made me dizzy haha